When opening an existing Mosaic configuration and using custom I/O Modules, it is possible to run into the scenario where certain modules appear in a folder called Unsupported.  This is a subfolder under Unused Modules. This occurs because the Mosaic configuration is using an older API.  Most modules are created using newer API's.  Hence when older API's are selected/in-use, these modules become unsupported.

To update the API in the Mosaic configuration, perform the following steps.

(Mosaic 2.8.3) This screenshot shows a config that was running API 2.0.  Changing it to API 5.0 allowed the previously Unsupported Modules to now be supported. 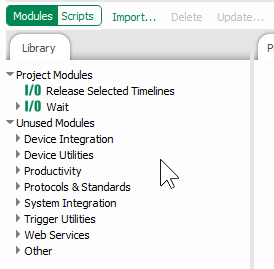